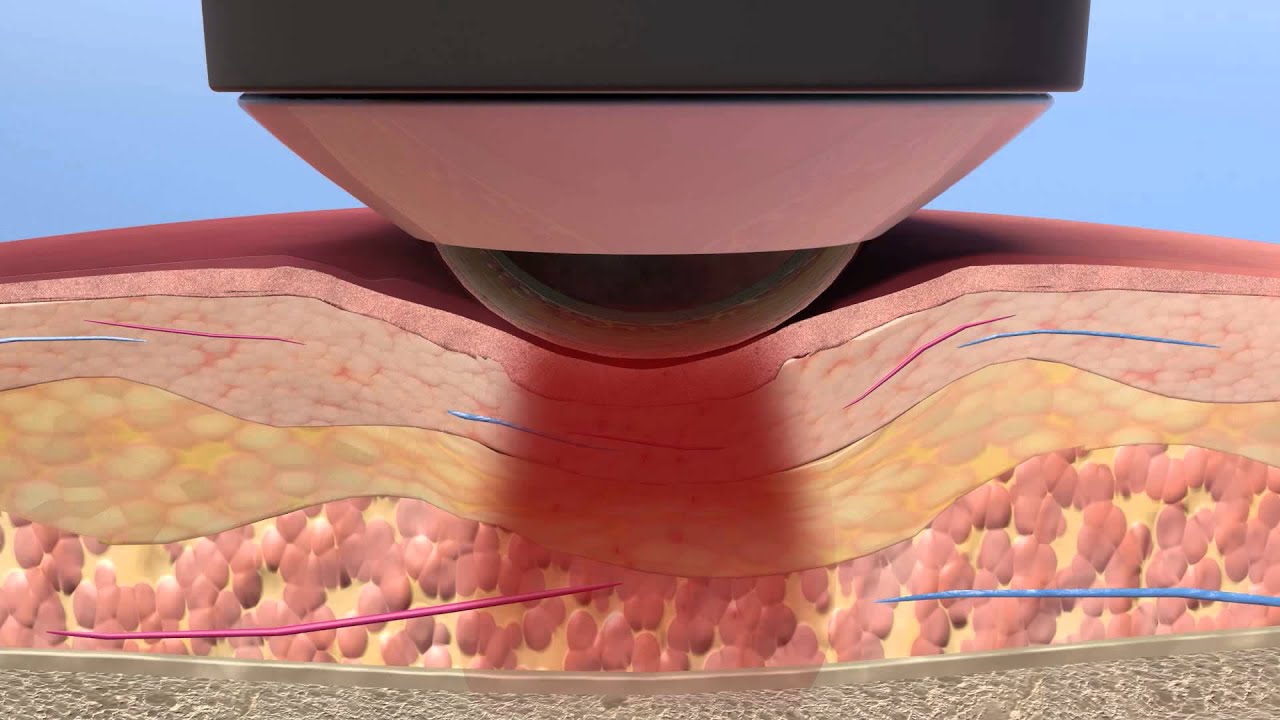 WHAT IS LASER POWER AND HOW DOES IT AFFECT PHOTOBIOMODULATION (PBM)?

The laser light energy is measured by the laser power.

Power seems simple but simply stating the output power does not relate the whole story when discussing therapy laser treatment. Not only is power important, but also the size of the area that is being treated. Typical power units for a laser are watts (abbreviated as W). Power is a measure of the number of photons emitted from the laser each second. Early therapeutic lasers had very low powers (less than 0.5 W) and very small beam areas (or spot sizes); consequently, early studies were often disappointing because the low powers were not able to provide sufficient number of photons to reach deeper affected tissue.

The Food and Drug Administration (FDA) classifies laser according their output power and recognizes four major classes (I to IV) of lasers, including three subclasses (IIa, IIIa, and IIIb).In December 2003, the FDA approved the first Class IV laser for the relief of minor muscle and joint pain.In October 2006, LiteCure was formed and FDA approval for the LCT-1000 a Class IV therapy laser was granted in February, 2007. LiteCure lasers are class IV lasers; they have an output power that is greater than 0.5 W.

Because Class IV lasers have a higher output power, there are some additional safety considerations that should be followed when using a Class IV laser. Eye safety is the most important consideration and the laser light should not be directed into an eye. The practitioner and patient should wear approved safety glasses for further protect from inadvertent beam reflections.

It is important to note that the LiteCure lasers not only have higher power but also have a larger beam area, making them better capable of delivering therapeutic dose to larger treatment areas.

WHY ARE HIGHER POWERS NEEDED?

Simply stated the greater the number of photons delivered to the surface, the greater the number of photons at any tissue depth. There is a threshold, a minimum number of photons that are needed to “turn on” the therapeutic effects of laser light. Hundreds of scientific studies have been done in vitro and have characterized the dosages needed to achieve a cellular response with light. These studies provide a baseline for the amount of laser energy needed to achieve results at the cellular level. PBM therapy is non-invasive; the light is applied to the surface of the skin. Some of that light is reflected by the skin or absorbed by other chromophores that are not associated with the injured cells and therefore do not contribute to PBM. Sufficient dose needs to be applied to the skin so that despite these losses sufficient dose reaches the skin and PBM occurs at the target tissue.

WHAT ARE THE KEY FACTORS NEEDED TO MAXIMIZE PENETRATION TO THE TARGET TISSUE?

For PBM to occur, light needs to reach the mitochondria of the damaged target tissue. Laser therapy is applied to the surface of the skin. The best clinical results are achieved when a sufficient amount of light (number of photons) reaches the target tissue. There are a number of factors that can help maximize the light that reaches the target tissue. These include: proper wavelength selection, sufficient laser power, reducing reflections, and minimizing absorption by molecules not involved in photobiomodulation. 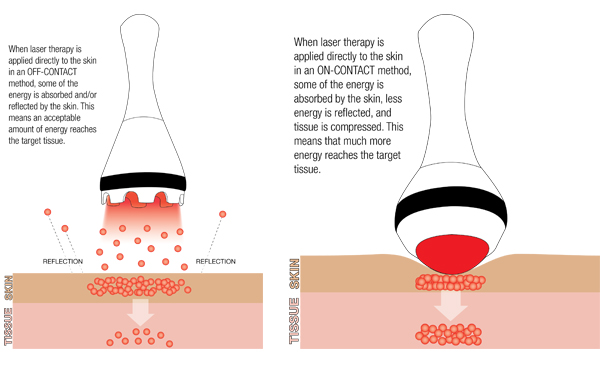 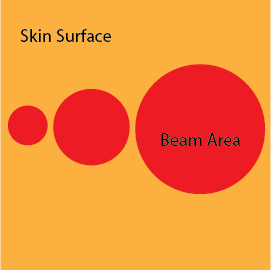 Definition:  Area of the beam on a surface.  Beam area will depend on treatment head used and the distance the treatment head is held from the surface.

Instead of beam area, laser physicists use laser “spot size.” The spot size is either the beam radius or beam diameter, depending on the definition used. This is further complicated because the intensity of Gaussian laser beams decreases from a central maximum gradually to 0 at the edges. Since there is no clearly defined edge at which to measure the beam’s radius or diameter, “spot size” will depend on the spot size definition used (e.g., full width at half maximum or distance from maximum irradiance to irradiance of 1/e2). Nevertheless, by using a scanning application of PBM treatment, any inhomogeneities in the beam irradiance are averaged over the whole treatment area. 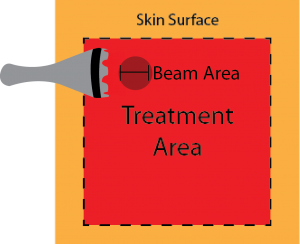 Definition:  Area of the skin surface that is treated.  For LiteCure lasers, this area is larger than the beam area. 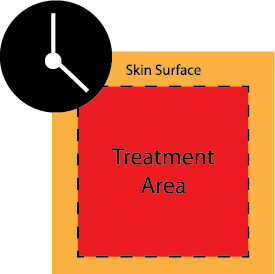 Definition:  Total time of a treatment to entire treatment area. 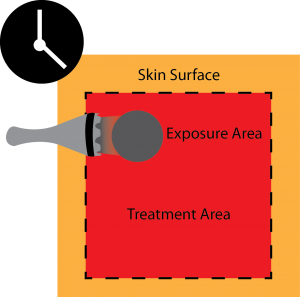 Definition:  Time that surface is exposed to the beam. 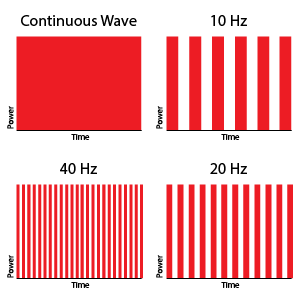 Definition:  This term is used for pulsed lasers. It is the percentage of one period in which the laser is emitting.  For LiteCure lasers operating in pulsed mode, the duty cycle 50%. 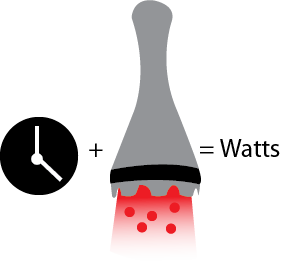 Definition:  The total energy delivered during a treatment is determined by multiplying the average power during the treatment by the total treatment time. 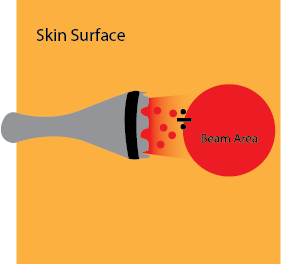 Definition:  The output power of the laser divided by the beam area.  The power intensity at the surface of the skin. For calculation of dose delivered during scanning:
First, let us assume that the treatment beam is uniform.

In this case, the irradiance would then be the power divided by the beam area,
E=F/As. 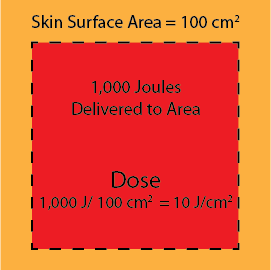 This is the total energy delivered divided by the total treatment area.

For LiteCure Lasers, the dose will be the total energy delivered to an area divided by the total area (skin surface area) to which it was delivered.  This assumes that scanning covers the treatment area evenly to distribute an even dose to the tissue. By scanning the entire area evenly any inhomogeneities in the beam are averaged over the whole treatment area. 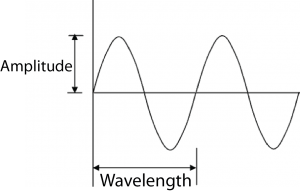 Definition:  The distance between two consecutive peaks of an electromagnetic wave.

Term:  adenosine triphosphate
Abbreviation or Other Terminology Used:  ATP
Definition:  Molecule in the cell that transports chemical energy for metabolism.

Term:  chromophore
Definition:  The part of the molecule that captures light energy.

Term:  cytochrome c
Definition:  A component of the electron transport chain in mitochondria.

Term:  endogenous
Definition:  Growing or originating from within an organism.

Term:  mitochondrion (pl. mitochondria)
Definition:  An organelle found in large numbers in most cells, in which the biochemical processes of respiration and energy production occur.

Term:  near-infrared (NIR) window
Abbreviation or Other Terminology Used:  therapeutic or optical window
Definition:  The range of wavelengths from 650 nm to 1350 nm where light has its maximum depth of penetration in biological tissue (see figure below).  Visit the Wavelength Selection page for details about water absorption and to see the various absorption coefficients as a function of wavelength on a linear scale. 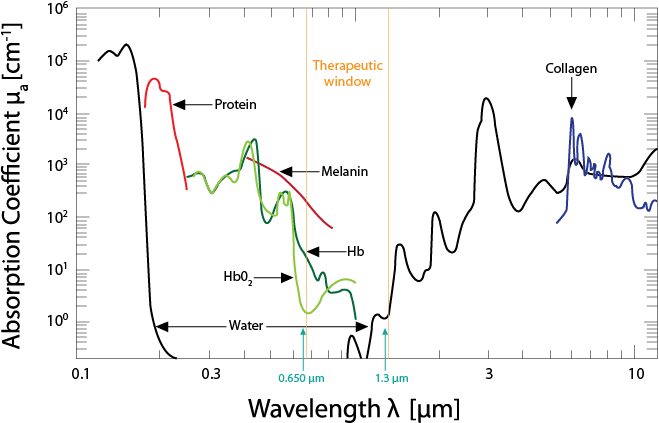 Serving Canadians for over 35 Years

We love to speak with our customers.

SIGN UP FOR NEWS and be first to hear about our specials!